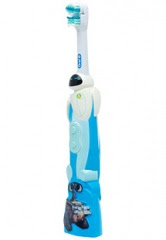 Think back to when you were a kid. What was the most exciting part about going to the dentist...assuming there is an “exciting part” lodged in your memory? Ask me, and I will tell you it was getting the new toothbrush!

Today my kids went to the dentist.

The toothbrushes they received were a lot nicer than ones I got when I was a little kid. The toothbrushes I got were emblazoned with the dentist’s name and logo, and aside from being new, that was about it.

My son’s new toothbrush was perfectly sized for a four-year-old hand. The dentist’s name and logo had been replaced with a picture of a boy kicking a soccer ball. The affinity my son had for the toothbrush could not be contained; he had to show it to me immediately!

Clearly my “tinkling” (as my daughter calls it) into the potty made no difference in my ability to look at his new toothbrush as my son proudly held it up for my inspection.

Green. I saw that it was a green toothbrush…right before it fell into the toilet.  The same toilet I was "tinkling" in (the picture of the boy kicking the soccer ball was a detail I would later discover…).

He tried to be strong, “That’s OK, Daddy… it’s OK.” But the tears were coming too fast, and the uncontrollable crying quickly ensued.

Well, it seemed to me the issue could be solved by putting the toothbrush in the dishwasher. I even mentioned to my wife this was the obvious solution. Little did I know this was not acceptable. And I was able to figure this out without the word “no” actually being spoken. Seems “No!” can be conveyed with a certain look…

Five minutes later, my son and I were in Walgreens looking at new toothbrushes. “I like this one, Daddy.” 'This one' happened to be an electric Wall-e toothbrush.

So now I had another problem (well, the green toothbrush was still in the toilet, but in addition to that)… Clearly I could not go home with a new electric toothbrush for my son and nothing for my daughter. She did tell me she wanted a package of Starburst candy as my son and I were heading out the door. I thought I could get a three-dollar toothbrush and a packet of Starburst and all would be good…right.

I wasn’t about to tell my son he couldn’t have the Wall-e toothbrush…I mean, come on…his green toothbrush was floating in the toilet.
“OK William, that’s a good one.”

And the green toothbrush was still floating in piss.

So it turns out the little bags used to clean up after my dog work equally well for removing toothbrushes from the toilet. The irony.
Posted by Unknown at Tuesday, September 22, 2009 1 comment: